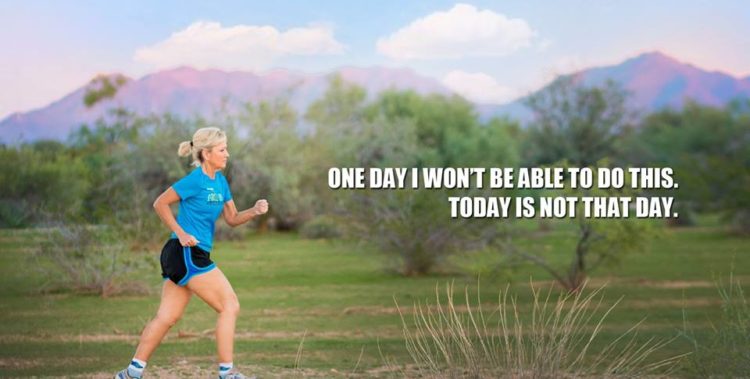 Carol is the most determined person I know. She once ran a marathon in which she ducked around police barricades and dodged police to finish a race that had been officially called due to dangerously hot and humid conditions. “Don’t tell a marathoner not to run her race,” she says with a tone as playful as it is defiant.

Sometimes, you just have to fangirl a friend. So this week I submit to you 10 takeaways from my watching my girl Carol Reeve run like the wind. 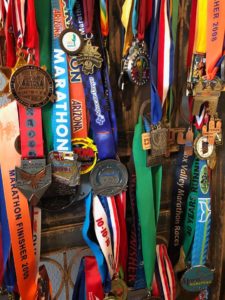 Goals are gold. It’s been said that a goal without a plan is just a wish. Ever since Carol ran her 50th — the duck-and-dodge 2007 Chicago Marathon she finished in spite of the heat — she’s had her sights set on 100 marathons. She trained. She planned. She ran. From Alaska to Tahoe to Maui, she notched marathon after marathon. She was an arrow aimed at the finish line of her 100th. There was no chance Carol was going to not get here.

Comebacks require setbacks. On the other hand, there actually was a chance that Carol wouldn’t get here. After her 81st marathon, a cascade of physical injuries hindered her body and got into her head. Her comeback is a story all on its own and it’s chronicled in this earlier blog post and in a slick 8-minute video you can watch here. It suffices to say that Carol would never have savored the success of No. 100 — at least not like she did on Sunday — if her running career hadn’t nearly careened. “The best finish lines have been since 82. They are the most precious and the ones I’ve had to work the hardest for,” she says. “I feel like running now is more of a gift than a gimme.” 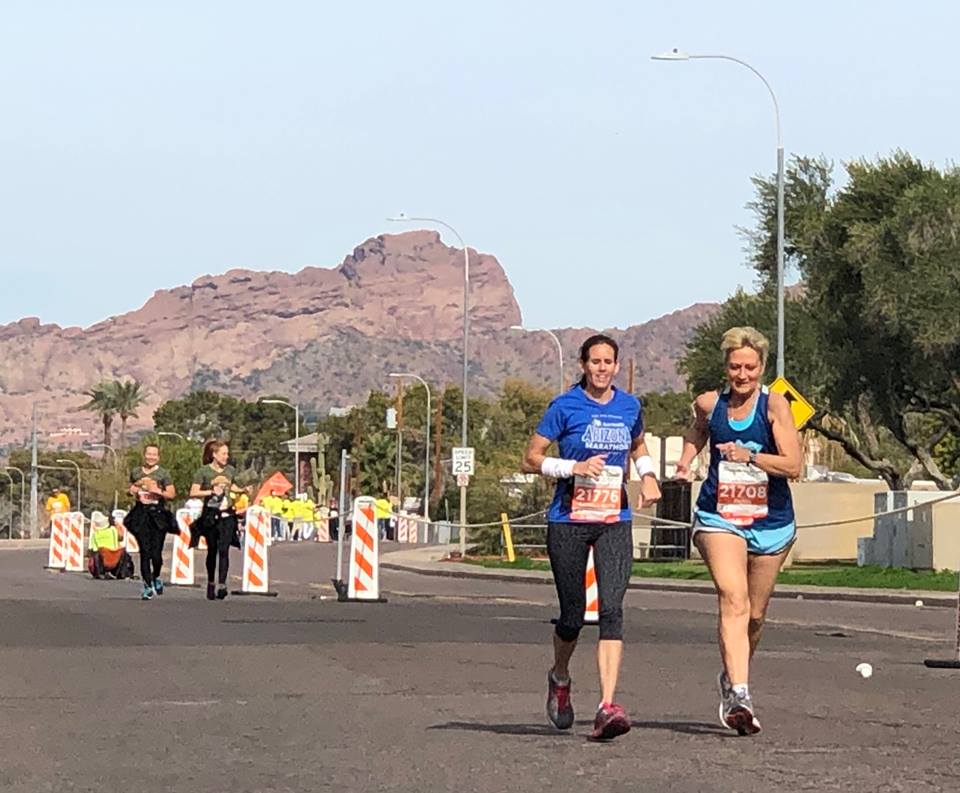 Heather Brecke and Carol Reeve run south of Camelback Mountain in Phoenix between miles 21 and 22 of the Rock ‘n’ Roll Arizona Marathon.

We need people to run with. A few marathons ago, Carol’s friend Heather Brecke met her for dinner and asked for the honor of running Carol’s 100th marathon with her. On Sunday, she paced her friend step for step. “A lot of people gave her really cool gifts for her 100th. Running with her was a gift I could give to her,” says Heather, whose favorite part of Sunday was having Carol to herself for 26.2 miles. Carol would have finished the marathon with or without a running buddy. But it might not have been as fast. And it definitely would not have been as fun. 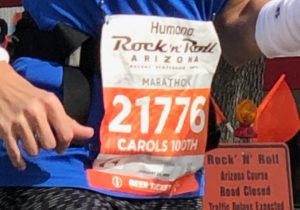 Great achievers have anonymous supporters. Heather probably won’t like this because she never wanted Sunday to be about her. She tried to duck out of photos so Carol could be the star. She slowed at the end so Carol could cross the finish alone. Even Heather’s “name” on her Rock ‘n Roll Marathon bib was “Carol’s 100th.” She let her friend have her moment in the sun without needing to steal any of the glory. I love that so much.

Anonymous supporters, part 2. Carol’s running friends Deirdre Kirmis and Marcia Kuyper met her at the last .2 to run her in to the finish. Her friend Marci Libsack joined with them to plan a 100th marathon carb-loading party the night before. Kara Shull, her former physical therapist flew in from New York to be her personal PT for five days. Carol feels like she’ll never be able to thank all her supporters. What she hasn’t fully realized is none of them want thanks. They just wanted to see their friend achieve her dream.

God’s in this thing with us. I will never— and I mean never — understand the physical punishment it takes to finish a marathon. But in talking with Heather after the race, I heard a pretty cool perspective on how living out our faith is like running a race. “God is with us whether we have to walk or have to run. Whether it’s the part where we feel good or bad. He could go faster,” Heather says, “but He chooses to stay with us every step of the way — all the way to the finish line.”

You can’t rush friendship. Carol couldn’t stop marveling Sunday night over her show of friends coming out to support her. The surprising thing is that she would be surprised. For years Carol has poured herself into friends. She remembers birthdays. She remembers dark days. This kind of traction doesn’t happen overnight or by accident. It happens meal by meal. Memory by memory. Step by step. 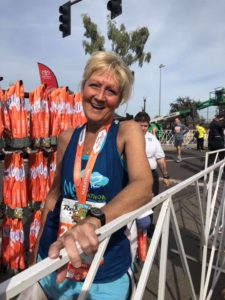 Enjoy the moment. Carol did something really hard with a lot of joy on Sunday. Every time I saw her, she was smiling. “As runners, it’s easy to get into the mentality of finishing this race and getting to the next one. It’s great to be forward thinking but we miss the moment,” Carol says. “My friends reminded me to enjoy every step of the week and every step of the race, and so I did. I really did.”

Pain has a finish line. One of my favorite memories of Sunday is Carol calling over to the sidewalk and asking where the mile 25 marker was. “It’s just ahead, around the corner,” I said in my best you’ve-got-this voice.

“Could you move it up a little?” she said, joking but also kind of not. I couldn’t help but think how poignant that was. On the race course and in life, it’s hard to grind it out sometimes. Right about mile 25 you’re wondering if you’ll make it. I love Carol’s philosophy on the last nine miles of a race. She breaks them into nine single-mile segments. Maybe that’s a good idea in life, too. Break it down. Simplify. Don’t borrow worry. Just finish mile 17. Then 18. Then 19. Let the next mile’s worry take care of itself.

Proud papas can take liberties with math. Virgil and Evelyn Reeve, married 57 years, flew in from Illinois to witness their daughter’s 100th of 100 marathons. And 82-year-old Virgil was something to see. He shot photograph after photograph to chronicle his girl’s success. He would not be cheated. He posed every supporter for pre-race and post-race photos and then he posed them some more. “You won’t break my camera, but you will make it shutter,” he told every Carol Reeve reveler. He positively beamed. Finally, after the photo session(s) appeared to be complete, I threw a softball question at him. “On a scale of 1 to 10 how proud are you of your daughter for what she did today?” 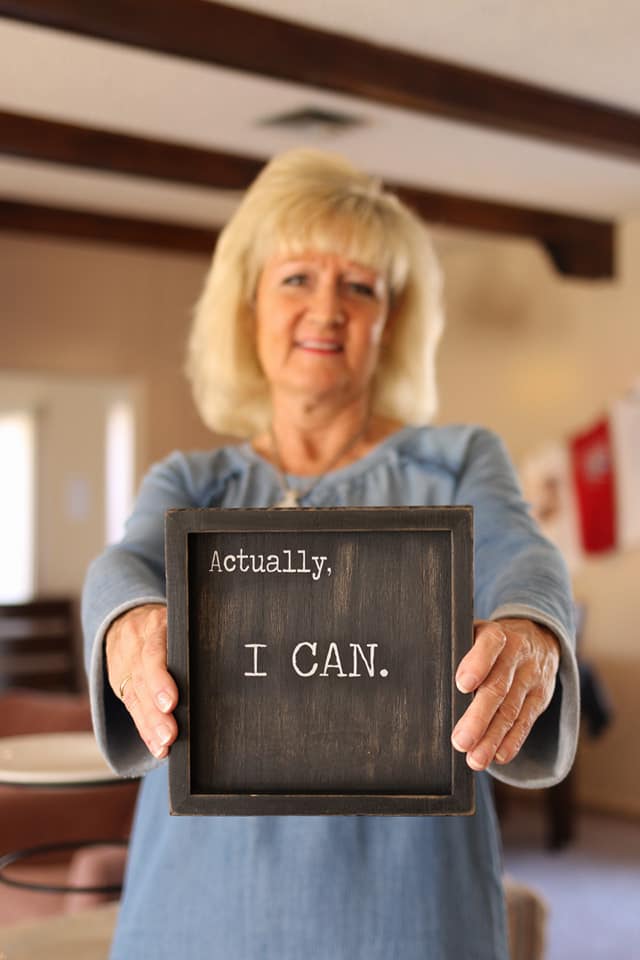 “One day” and “Actually, I can” photos courtesy Marcia Kuyper, Joyful Gestures Photography