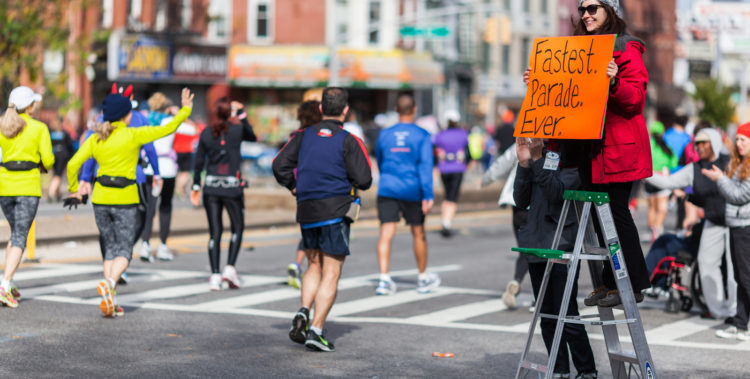 My friend Carol Reeve logs a lot of miles. She has traveled all the way from L.A. to D.C., or for those with more European sensibilities, from Madrid to Moscow.

And that’s only during the actual marathons she has run. Factor in her four to five days a week of training – multiplied by the 27 years since she ran her first marathon – and she has circled the globe in running shoes. Twice.

In some ways, Carol is what she does. She is no-nonsense, goal-oriented, driven, and consistent. Her forward-motion life is the embodiment of Hebrews 12:1. We’ll come back to that in a minute.

This assumes that Mother Nature doesn’t get in the way. She’s been a little rough on my girl over the years. In training, Carol has dodged rattlesnakes in mid-air and came home caked in dust thanks to a haboob. In 1993, severe flooding washed out a bridge near the Arizona State University campus in Tempe. But there was Carol. Running a marathon.

The New York City Marathon got washed out in 2012 by Hurricane Sandy, and the Chicago Marathon got cut short in 2007 due to extreme heat. Carol was between miles 18-19 when that race was called. She finished anyway, playing cat and mouse for 7-plus miles with police barricades and officers who tried to shut the race down. “Don’t tell a marathoner not to finish her race,” she says, shrugging. 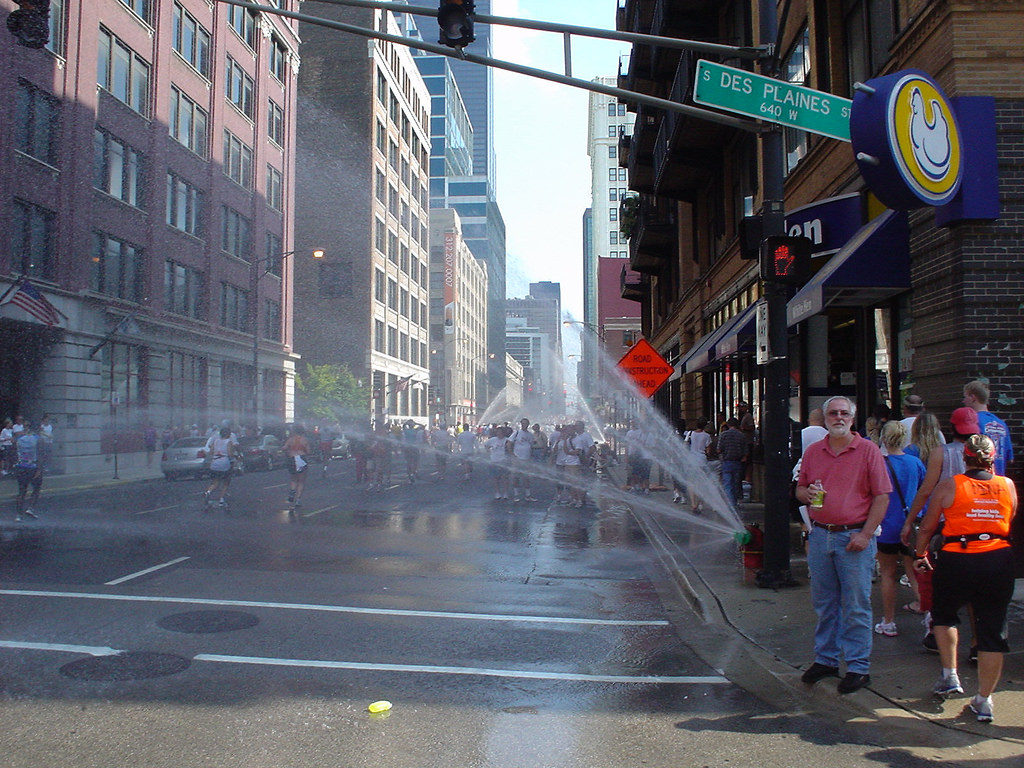 She once sleuthed out a chalk-marked marathon route in the snow. Another time, a pre-dawn desert trek to the start line in Phoenix landed her in a cholla cactus. (For those who have never seen a cholla, they look cute in their fuzzy clusters, but microscopic reverse barbs have a reputation for “jumping” out and digging in.)

At any one of those obstacles I’d be done. Rattlesnake on the trail? Bye Felicia. Barricades in the road? Oh THANK GOODNESS. Cactus barbs? Paramedics, please. I don’t want to train. I don’t want the pounding on my knees. I think I’d get bored. Or hungry. Or I’d have to go to the bathroom or want to check Facebook. But mostly, I don’t like that side cramp I get when I walk to my mailbox.

Carol, on the other hand, almost needs to run to live. She found this out in May 2014 after her 81st race. Fresh off of six marathons in six months, her body said enough. “I got into a mode where I thought, ‘I’m only getting older, so I have to make this happen while I can.’ It’s horrible athlete psychology, really,” she says. 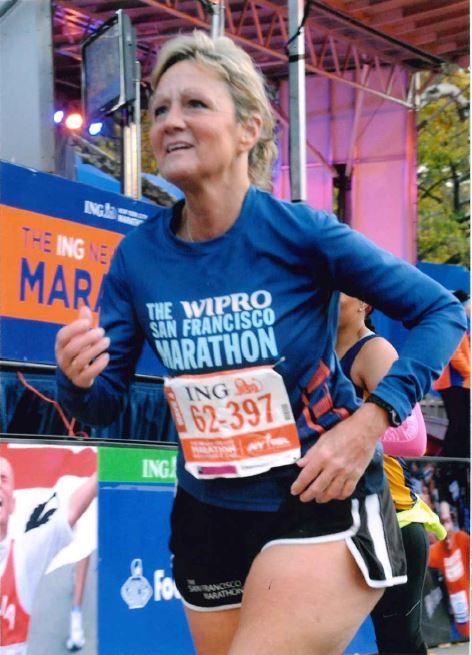 Carol Reeve, at the New York City Marathon in 2013.

Her stretch of six in six took its toll physically. A weak right hip triggered a left knee problem, which cascaded into tight calves, hamstrings and quads. Muscularly she was a mess. She could not even walk up the flight of stairs in her home. “Stop at Nothing” – the words on her NYC Marathon jacket – mocked her.

The greater toll may have been mental and emotional. “I had been running since I was 15, so 36 years of habit had been ripped out from under me,” Carol says. She couldn’t run. She could barely walk. She became depressed and sleepless, which further robbed her body of its ability to heal. “One night getting into my car, my knee went out. I collapsed into my car and sobbed. I got home, changed into my running clothes – which was a joke – and went out for a walk in my neighborhood. I almost got hit by a car. I was really mad the car missed,” she says.

It was a dark moment. What Carol didn’t know is that it was her darkest-before-the-dawn moment.

She got connected with a physical therapist at EXOS, a health and performance center in Scottsdale where elite professional athletes train. They untangled her muscles. They untangled her mind. During months of grueling recovery, they got her back into running form and she ran marathon 82 that fall.

At the start line, she mentally breaks a race into halves. By mile 17, she pares the 26.2 mile race down to nine single-mile legs. And then there’s the .2 at the end. “The .2 is the hardest part. You can see the end and you can’t get there fast,” she says.

Finally, she crosses. Quads burning. Endorphins soaring. Knowing she’s running the race marked out for her. 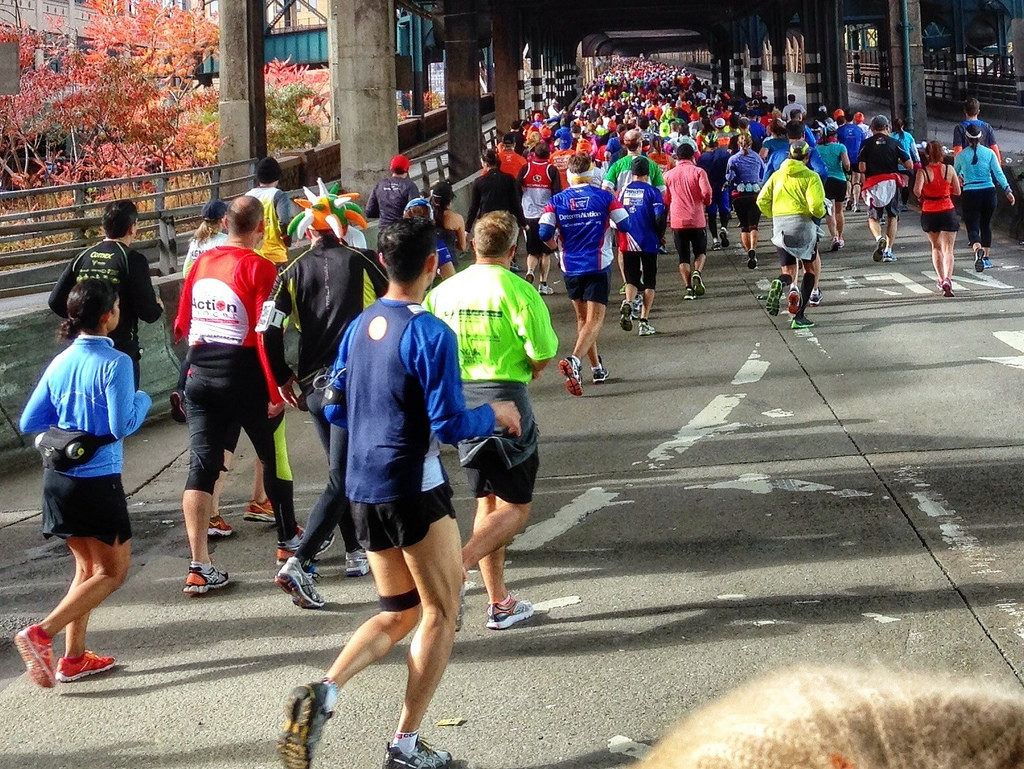 Carol really is one of the bubbliest, most positive people I have ever met. She is also Hebrews 12:1 in motion. I will never read this verse without picturing Carol. I can’t un-see her running. I can’t un-think about her perseverance. She puts teeth and grit and guts into the verse, one of my favorites.

At its onset, the verse reminds us to do what Carol does: run light. Even in Phoenix’s punishing summers, she runs without a water bottle. Don’t try to lecture her about our 115-degree weather – she knows, she knows. She plans her route around public drinking fountains. It’s more important to her to run light than carry items that bog her down.

Carol reminds me to lay stuff down. To clear out the clutter – in my home and in my heart. To keep things simple. To forgive rather than hold a grudge.

“ … and let us run with perseverance the race marked out for us.”

While running light is a hard enough task, it’s not even the primary task. God knows this race is hard. He knows. He backloaded Hebrews 12:1 with the conditions He knew we would face. The instruction to run with perseverance implies struggle. And the Greek word for race, agōna, is the word that gives us agony. It’s not just running. It’s conflict. It’s discord. It’s contradictions. It’s unfair. 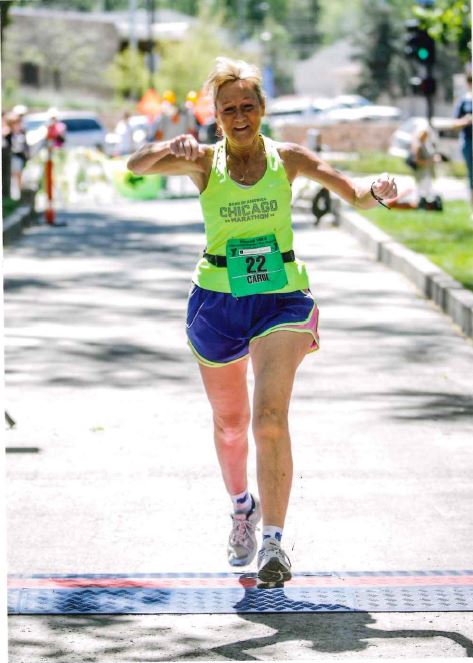 And so, apologies to my friend Carol, we’re all marathoners. Sure, some of us get side cramps walking to our mailboxes. But everyone’s running some kind of race. I’m just running my race in my lane. I’m trying to find my own chalk-marked path even when it’s covered in snow. I’m dodging the barricades lodged between me and my finish line.

What about you? Is there forward motion? Are you running your race? Are you farther along than you were yesterday? Last month? Last year? Not to pressure you, but my friend Carol is almost to D.C.

I’ll be having dinner with her next week. I should tell her how much she inspires me toward continual advance. To live a forward-motion life. To keep moving even when it’s hard and even when it hurts.

I should tell her that someday when I’m sitting around swapping stories with my friends I hope to be able to say something straight cool like, “Don’t tell a marathoner not to finish her race.”

But I just heard my mail carrier drive away. So first, that.