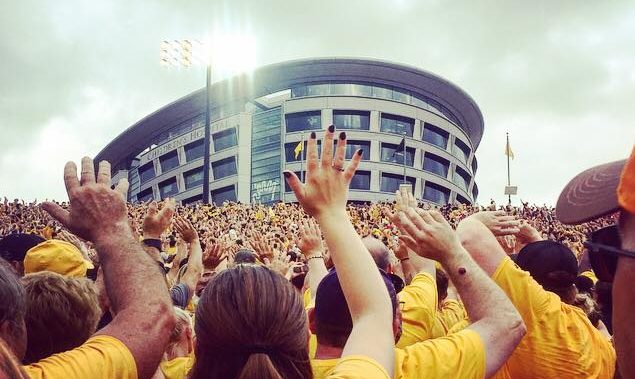 For 60 seconds on home football game days, 70,000 fans in Iowa City, Iowa, remind us that when it comes to wins and losses that matter, we’re all on the same team.

If you don’t know the first thing about a first down, don’t worry. This is not a football story. It’s a human story.

The setting is Kinnick Stadium, home of Iowa Hawkeyes football. Overlooking the stadium is University of Iowa Stead Family Children’s Hospital, where game-day preparations on any given Saturday are as intense as anything happening on the field below.

Pediatric patients wake up early. They apply eye black, take their meds, and rearrange their tangle of tubes and wires to change into Hawkeyes gear. They trek to the top floor with trachs and oxygen tanks and IV poles to take their seats along 12th floor windows that offer a full view of the football field. And from kickoff until the end of the first quarter, they cheer like crazy for the Hawkeyes.

OK, maybe they keep one eye on the clock.

And maybe they get a little antsy during TV timeouts or delay of game penalties.

And then finally it happens: The Iowa Wave. A glorious 60-second moment when kids living with cancer, kidney failure or hearts that don’t work are the epicenter of Iowa. At the end of the first quarter, everyone in the stadium — fans, players, coaches, referees, sportswriters and mascots — turn away from the field and toward the top floor of the hospital to wave. They smile and yell and cheer for fragile kids fighting fierce battles. For one full minute, it’s as if 70,000 say, “We see you. The world isn’t passing you by.”

The Iowa Wave, which started last year, is already being called the greatest tradition in college football. And college football’s traditions are pretty great. There’s “dotting the i” at The Ohio State University, where a fourth- or fifth-year sousaphone player literally gets to dot the i in Ohio during the marching band’s halftime show. There’s March On, a spectacularly synced moment before each year’s Army-Navy game when the Corps of Cadets and Brigade of Midshipmen — the entire student bodies of their respective academies — take the field in their dress uniforms. And taking its place along these storied traditions is the upstart Iowa Wave.

The story of the Iowa Wave

Storied traditions always start with a story. The beauty of the Iowa Wave is that this particular story starts with a 36-year-old mom who runs a daycare in a tiny Iowa town. With a single Facebook post on Hawkeye Heaven, a fan page with north of 100,000 followers, she sparked something pretty special.

Her name is Krista Young and I called her up last week to chat about this little movement. “I just saw how close the hospital was to the field. All I did was post about how cool it would be to wave at the kids. Show them we see them. Let them forget about their hospital life for a few minutes,” she says. 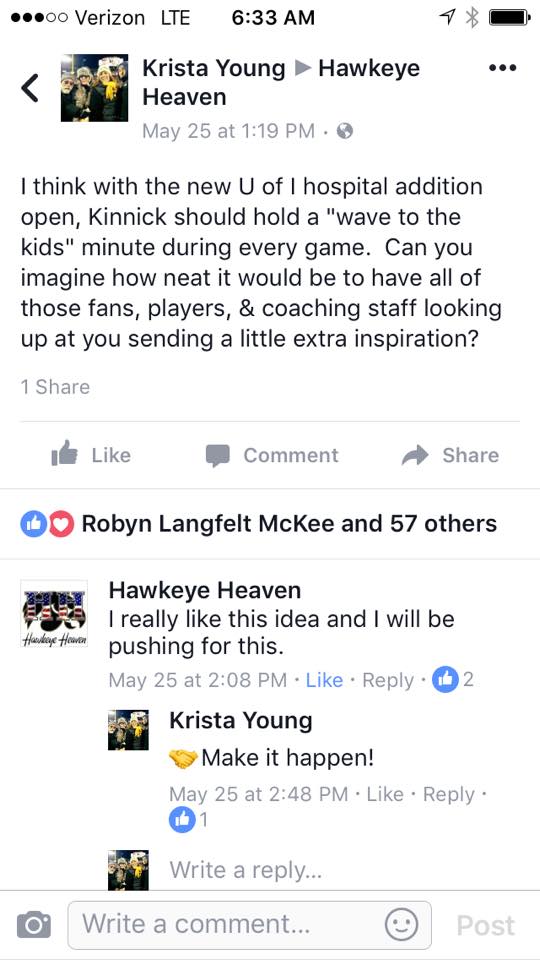 She’s just an ordinary mom who had an idea. What started as a whim became a Wave. And as waves do, this one rippled.

There’s the group that had “Iowa Wave” t-shirts printed last year and made enough money to donate six figures to the hospital. There’s the Iowa resident — born and bred a Nebraska Cornhusker fan, no less — who recently donated 75 pairs of binoculars to the children’s hospital so kids on the 12th floor could see the faces of their Iowa Wave well-wishers. Just last week Krista got a Facebook message from a Hawkeye fan who got a tattoo of a hand waving. “I wrote back, saying, ‘You put that on your body? I don’t know if that’s crazy or awesome,’” Krista says.

I hope someone says that about you. I hope someone says, “That thing you did? I don’t know if that’s crazy or awesome.” I hope that idea in your back pocket sees the light of day. I hope the dream that makes your heart race stirs you from maybe to moxie. I hope your whim becomes a wave.

“It can be simple. You don’t have to have a big fan base or money or followers. If it’s a genuine idea and anyone else feels the same, it’s going to catch wind,” says my favorite 36-year-old mom who runs a daycare in a tiny Iowa town.

Your idea might not ignite a stadium. But it might ignite a life. So, those two fish and five loaves that seem so small to you? Maybe it’s time to trust that God is still good at multiplication.

It might get a little messy. You might need to change lanes. But what a tragedy it would be if you never left the driveway because you were afraid no one would like your car.

A few years ago my friend Shawna wanted to create a way for women to connect and meet new friends. She wasn’t totally sure how to do it so she just opened her front door. She literally posted an invitation on Facebook for an open house every Thursday morning. “I just wanted to encourage women. Life is hard. And many of us feel alone in it,” she says. Some weeks it worked. Some weeks it flopped. But in the end, it was her way of saying “I see you” to lonely Facebook friends who were hiding in plain site. And it set the table for her to launch a podcast, available on iTunes or right here.

My friend Marci drives by an assisted living facility every time she goes to the grocery store. One day she decided to stop driving by. She parked her car, went inside, and asked if they needed volunteers. Now she calls Bingo once a week for residents. Only she’s really doing more than calling out letters and numbers. She’s saying, “I see you. The world isn’t passing you by.”

Fish and loaves have always gotten it done. What have you got? What can you bring?

A game of inches

They say football is a game of inches. Life is too. The pediatric patients and parents at Iowa Stead Family Children’s Hospital know that better than most.

I think we all look forward to the day when there aren’t kids on 12th floors to wave to. Or people who feel isolated. Or families at the breaking point. In the meantime, let’s get creatively bold. Let’s park our cars and go inside. Let’s develop some muscle, because, my goodness, have you peered through the blinds lately? It’s tough out there. It’s tempting to look around and wonder where all the good has gone.

For one minute on home football Saturdays in Iowa City, Iowa, 70,000-plus people in Kinnick Stadium give us a glimpse of it.

And it started with a 36-year-old mom who runs a daycare in a tiny Iowa town.