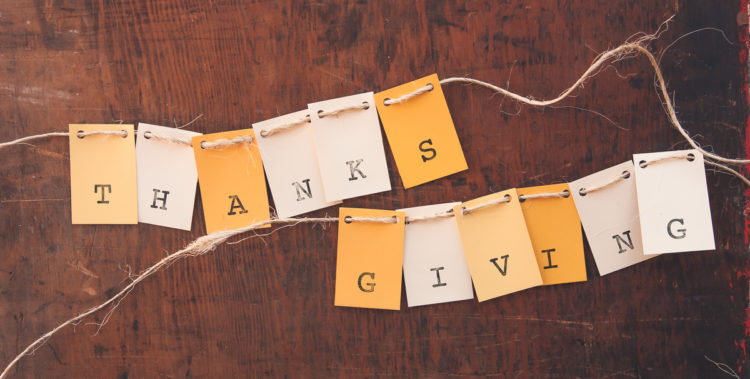 My 1982 kitchen cabinets — Exhibit A for ‘in everything give thanks’

When the pilgrims gave thanks in 1621, they’d lost half of their original group to malnutrition and scurvy. When Abraham Lincoln declared Thanksgiving a federal holiday in 1863, our country was headlong and halfway into the deadliest toll any war would take on American life.

In everything give thanks. It’s an unreasonable response to being tested, war-torn, tattered and tired. It is a willful, radical choice. And people notice. Come with me to a scene where a rugged cast of characters bears this out.

In Acts 16:25, the Apostle Paul and his ministry partner Silas prayed and sang praises to God. It sounds like pretty standard bible-y stuff, until we fill in the contours: The hour was midnight, their wounds were fresh from vicious beatings, the stench in the prison would have been overwhelming, and they were bound in almost certainly painful postures.

In what feels like a postscript to the sentence, we read: “And the prisoners heard them.” Um, you think? It was midnight in prison. Inside those walls, decibels were measured in agony, not beauty. The prisoners had never heard such a sweet sound, at least not in there. “Heard” in the Greek suggests they “intently listened.”

Maybe the songs soothed their angry souls or disarmed a sin-soaked thirst for revenge. Maybe prayers pointed them to the One who could break their chains. For all we know, the prisoners thought Paul and Silas were a few fries short of a Happy Meal, that is, until their prison doors flew open and their chains — and jaws — dropped to the floor. 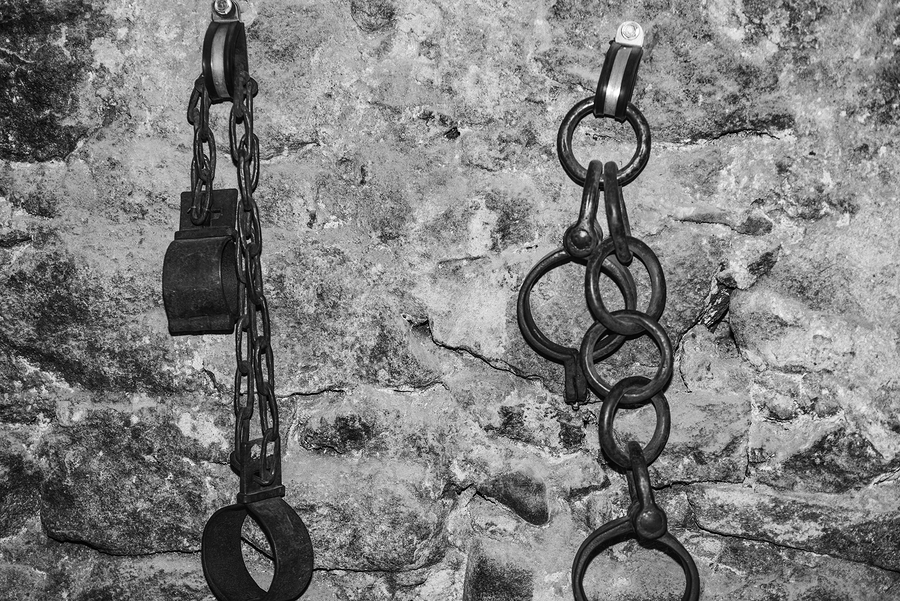 Of this we can be sure: Thanksgiving is life-giving. Gratitude is game-changing. It’s something we can actually set our minds on. Cognitive Neuroscientist Dr. Caroline Leaf has researched the neuroplasticity of the brain and has found that we can literally create new neural pathways with healthy, positive thinking patterns (just as we create and perpetuate a tangled, toxic thought universe with lies and negativity).

“Be transformed by the renewing of your mind” isn’t just sweet Biblical sentiment. It’s scientific possibility.

A page from my journal

I don’t always win at the giving-thanks game. But for every difficult hash mark on the timeline of me, I can show you 10 hash marks where God provided a solution, a role model, an inspiration, or His presence. In any current journal, I use the last 10 pages to keep a running list of things I’m thankful for. It gives me a quick reference when I need to dig into Psalm 75:1, “We give thanks, for your name is near. We recount your wondrous deeds.”

I need help recounting. My mind goes blank when fear tells me lies. I struggle to keep His name near. So this Thanksgiving, here’s a snapshot of what I’m thankful for.

I am thankful for my kitchen. Poor thing, it’s stuck in 1982. The original oak cabinets project a certain je ne sais blah. My oven is the size of a tater tot. The fluorescent lights buzz with a low-grade hum that a friend with perfect pitch once told me was an F#. But here’s the thing I love about my 1982 kitchen. It’s in the house I got to keep. We came pretty close to foreclosure in 2009. The math looked bad, the lender closed in — and, at the 11th hour, God made a way. So here I sit in 2018, typing my blog at my breakfast bar. It’s the gathering place that comes alive when teenagers come over to inhale food and figure out their lives. It’s the room where a turkey can barely fit in the oven, but my gratitude can barely be contained by the walls. My kitchen’s pathetic aesthetic teaches me every morning about the importance of perspective.

I am thankful for powerful, life-giving writers. Writers like Paula Scott, whose words fill my soul (and delight it too, as in her post this week about how not to cook a turkey). Or Susie Larson, whose morning and evening blessings bookmark my days with a glimpse straight into the heart of Jesus.

I’m thankful for my niece Annemarie, who is as lovely as her name. A military wife living overseas, she took my family traipsing all over Europe this fall. We toured castles, climbed snow-kissed Swiss Alps and took silly selfies in front of the Eiffel Tower. But as it turns out, we could have done the entire trip in Tucson — because the real magic happened in the late-night hours when two adult women put on pj’s, poured wine, and talked about life and loss and redemption and Jesus. 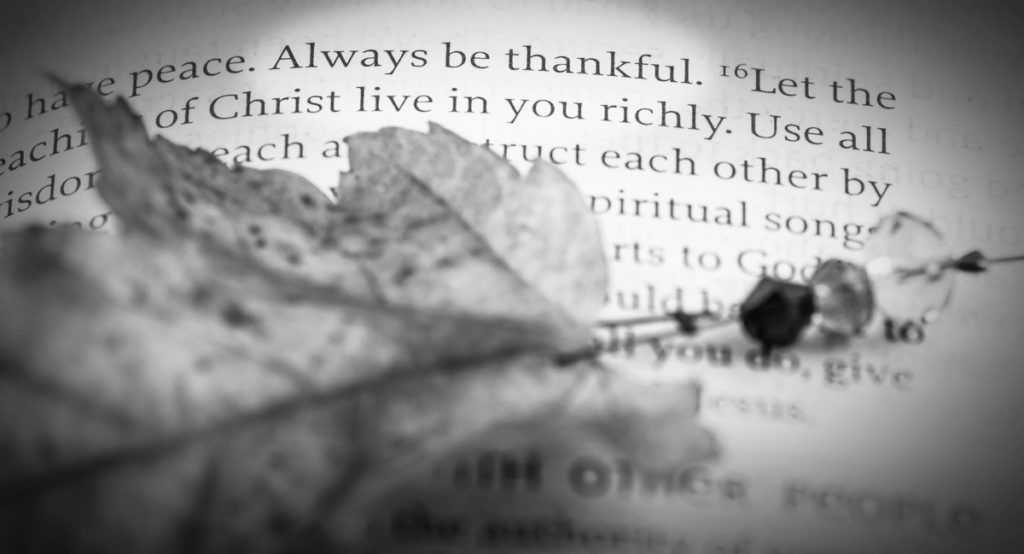 I’m thankful for my friend Melissa, who with a single sentence in 2017 gave me the a-ha moment I needed to begin a terrifying process that took me from fear to anxiety to freedom.

I’m thankful for that anxiety. It made me a better friend to those who are in its grips. It helped me feed all my refrigerator-magnet platitudes into the shredder. And it drove me to stand on God’s word with both feet and my whole heart.

I’m thankful and deeply indebted to my friend Marcia, whose brother and American hero David Livingston died in the Titan II Missile Explosion in 1980. The 9-megaton thermonuclear warhead could have triggered a nuclear catastrophe stretching from Dallas to Memphis and St. Louis to Baton Rouge. In the end, there was just a single casualty — my friend Marcia’s brother. He would have turned 60 this fall.

I’m thankful for my friend Carol, who is training to run her 100th marathon in January. If you line up her marathons end-to-end, she has run from L.A. to D.C. Factor in the miles of training and she has circled the globe. Twice. She came back from a cascade of injuries to get to this 100th milestone. Her endurance inspires me to keep going when life is hard and when it hurts.

I am thankful for my friends in Northern California, who have trucked in supplies, housed fire victims, made meals, and, in a badly needed feel-good story, cheered like crazy for the Paradise junior midgets team. The Pop Warner football team lost all their gear in the fire, but played their championship football game in uniforms loaned to them by a rival team.

So there’s a short list of the things that help me drop anchor on days when I feel shaky and not so sure. A good anchor can hold up to 200 times its weight. A good Thanksgiving list can, too.

How about you? Ready to play a round of ‘in everything give thanks’?
Where has God shown up for you?
What years did He redeem that the locusts had eaten?
What relationship did He restore?
What Red Sea did He part?
Where did He end a battle, take up a battle, or give you strength to endure a battle?
Where did He offer hope or strength in the not-yets or ‘too-far-gones’?
Where are you trusting His goodness and wisdom to overwhelm the odds?

I’m especially tender today in thinking about those who are suffering. Those who wish they had 1982 cabinets to poke fun at because they lost everything to flames. Those who feel trapped in their own lives or in their own lies. Those who so badly need to see the sun. Oh friends, He’s loved you all this time. If your life is crashing down, if you’re nursing a secret heartache, or if someone has tried to place you in chains, words of thanksgiving may feel a little stuck in your throat. It’s ok. He knows. Whether you can barely utter an intelligible word or whether you’re singing praises from prison in the middle of the night, this act of giving thanks is a serious work of heart.

This life. It’s the only chance we get to praise God when it’s hard. In everything give thanks. What a sweet offering that must be.

Even the angels can’t offer Him that.