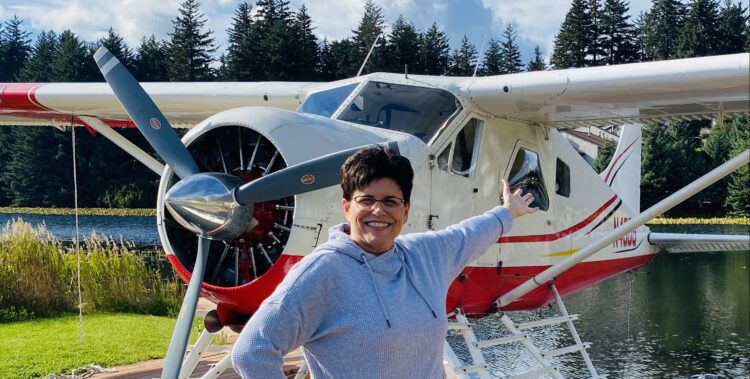 Falling in Love with Nouns and Verbs

It’s noon. A spit-polished group of strangers pack tightly into the living room of Leslie Leyland Fields, our host and writing instructor for the Harvester Island Writers’ Workshop. She’s in my Mount Rushmore of writers. I try to stay chill and not to fangirl her too hard.

Our group is made up of men and women, young and old, introverts and extroverts. First impressions are everything and we’re as good as it’s going to get—freshly showered, wearing clean clothes, touches of perfume and cologne lingering. At Harvester Island, home of “fish camp,” the Fields’ commercial salmon fishing operation, we’ll have a couple gallons of water a day to wash. We are traveling to the “Kingdom of Clean Enough,” according to Leslie’s memoir, Surviving the Island of Grace.

Next Saturday is dying to let us in on her secret: we’ll be changed, probably forever. But for now, it’s this Saturday. Some of us dive onto our phones, inhaling desperate last hits of Instagram and FaceTime. We’ll be off grid—none of us knowing until two full days after the fact that Queen Elizabeth has died.

Some have come with urgency—a metastatic cancer kind of hope for capturing family stories beautifully and now. Others seek immersion in creation. I have come to fall in love with nouns and verbs again. Words have been loyal to me, delivering a steady paycheck for thirty years. But I have a nagging sense that the handle on my hammer is loose and I occasionally throw the head. I’ve slipped into using old saws.

I set off for a week of stacking letters into words into paragraphs purely for the joy of it. Applying teaching that will rock my everlasting, word-loving world, I’ll write a story later in the week in thirty minutes. I think it’s decent. The teacher laughs and cries. I’ll share it with you on Day seven.

A cannister the size of Off or Cutter apparently is our protection against a 1,500-pound Kodiak bear. Mmmmkay. They eat fish, not people. I think of Finding Nemo’s Bruce lying through his sharp teeth that “Fish are friends not food,” before he falls off the wagon and charges after Marlin and Dory shouting, “I’m having fish tonight!”

We take off in waves for Harvester in seaplanes zooming at low altitude alongside over spruce forest, misty fjords, and riparian wetlands.

Before losing my signal, I message Carina Alanson, a Fairbanks-based colleague at The Joyful Life magazine to see if she could meet in Anchorage for dinner on 9-10. It’s a Hail Mary, and silly me, I think Fairfax is like an hour away. Oh, and the catch? I won’t be able to confirm with her until the afternoon of 9-10 when I’m back on the grid. Crazy idea.

Landing on water is smooth as silk. It’s like flying into LaGuardia (IYKYK) but not terrifying because you actually do land on the water. As co-pilot I don’t want to say I did all the work, but, I mean look at this smooth landing.

Coming in for landing, we see the white belly of a fin whale diving in Larsen Bay, which extends off the Shelikof Strait, named for the Russian fur trader who founded the first Russian settlement in what is now Alaska. Put all jokes about “I can see Russia from my house” on hold.

I instantly love Dorah Dunigan from Uganda, and I don’t even know how amazing her story is yet. You’ll hear more from her later.

For now, we’re entering a land of no WiFi, no cell towers, and no showers. I twitch a little at the thought of not being able to check in with my husband. He has the SAT phone number, right? Life can happen in a second.

… I’m tapped for the co-pilot seat. What could possibly go wrong?