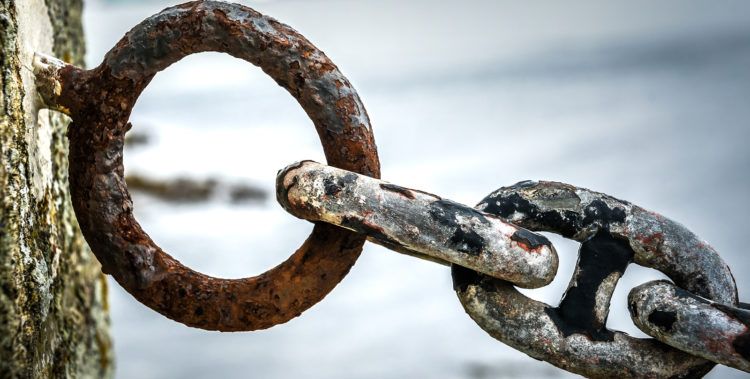 How End of School Tyranny Taught Me to Hope

End of school tyranny had us under its thumb. Finals, papers, concerts, and cramming rained down on the Man Cub and writing deadlines had me in their crosshairs, too. “I’m off to the grocery store,” I announced to my then 15-year-old son. He nodded and I breezed out the door. Time was short, my list long. The afternoon would require peak efficiency.

I zipped my shopping cart through the aisles, grabbing berries, almonds, avocados, and other foods to help my boy’s brain be at its best.

No sooner had I returned home and unloaded the groceries than my son sat down at a kitchen barstool and announced: “Mom, we are having a potluck breakfast in band tomorrow to celebrate the end of school. If you have a chance to go to the store to get doughnuts or something that would be great.”

I nearly dropped the milk — and the Man Cub — on the floor. They really do lose their minds, teenagers.

I offer you Exhibit B. Less than 24 hours later, after my 40-minute roundtrip commute to pick him up and drive home from school, my son casually said as we walked in the door, “Mom, I think I need to text dad to see if he can swing by school to get my Spanish book.”

These are the facts:

✓ The Spanish final was in 16 hours.
✓ It was 95 degrees.
✓ My husband is a bicycle commuter.
✓ “Swinging by” school would add 12 miles to his route.
✓ The school would be locked when he got there.

I flashed my most devastating “You have got to be kidding me” look. “Get back in the car,” I said, with a tone as controlled as it was psychopathic. It left little doubt about what I meant: “Don’t say a word. Don’t look at me. Don’t touch my a/c or my radio station or my very last nerve. Don’t. Just don’t.”

Now that he’s a driver, you all know how I feel about watching my son’s taillights. But I wasn’t in a “cherish these car rides while you have them” mood. I drove 20 tense, silent minutes to school. He got the Spanish book. I showed a ton of class and peeled out from the parking lot.

With a 5 p.m. writing deadline bearing down on me, I sped — both to get home and to fine-tune the perfect mom-lecture forming on my lips. It would be a hot blend of scathing discomfort and big big guilt over my son’s failure to take responsibility and respect my time. I turned to him to unleash it.

I opened my mouth.
I looked at the passenger seat.
I closed my mouth.

Absolutely wiped out from days of studying for finals, stressing about finals, and not sleeping because of finals, he was out. Surrendered. Asleep. Done.

The sweet baby. I could hardly take my eyes off of the slack contours of his face, that perfect exhausted little angel. Was there a harder-working student in the history of students? He needs warm, chocolate chip cookies and classical music playing in the background while he studies for Spanish. He needs berries and almonds and avocados and a MOM WHO HAS GOT A GRIP.

I backed off the gas pedal. I turned the radio off and pulled into a parking lot. “God, I’m so glad you are not like me,” I whispered. For the very first time in that very hectic day, I sat in His presence.

I thought about everything I am. I thought about everything God is not. He is not held hostage by an impossible work schedule. He doesn’t completely lose it when I fail to plan ahead. He isn’t ready to unload on me when I’m irresponsible or ready to hammer me with guilt when I don’t use the resources He’s given me wisely. He’s not interested in dropping the milk in dramatic protest. Or dropping the mic after a vicious tirade.

He just wants to drop anchor into my life. 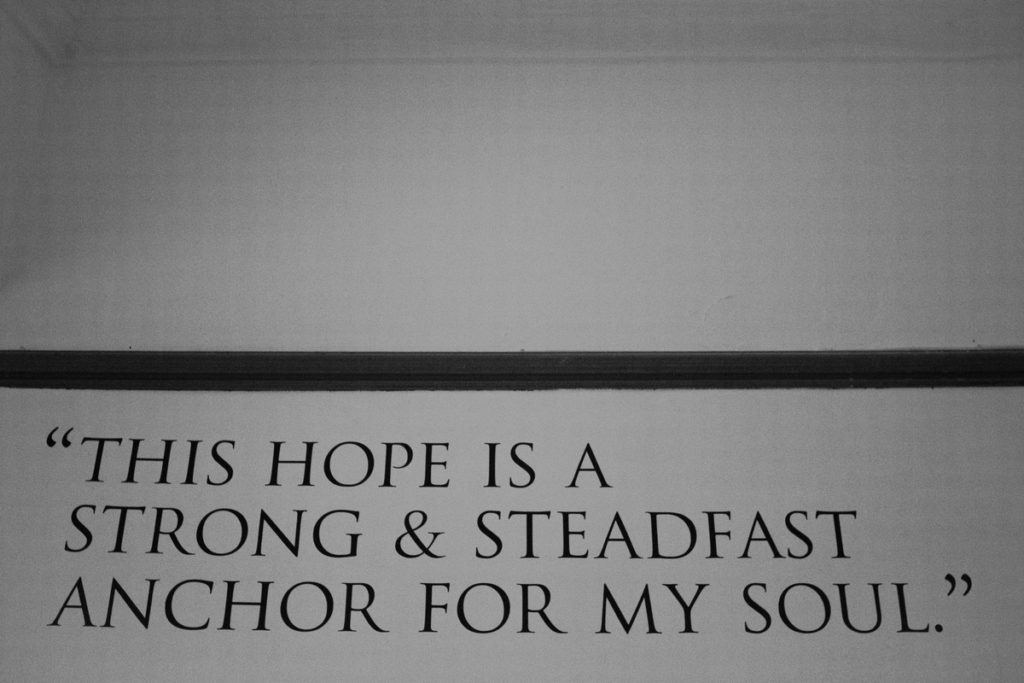 A soul anchor. That sounds so good, doesn’t it? Especially when we’re tired of being tossed around or beaten up or run down by the brokenness of this world or the broken places in our story.

But here’s the thing about anchors. You have to lower them. Hope can’t anchor our souls if we keep it safely contained on the surface, just sort of looking massive and impressive but not really doing anything. The kind of hope that anchors our souls drops underneath the waves, deep enough get under the lowest hashmarks on the timelines of our lives.

That’s the kind of hope that sets us free.

I’ve so often wondered about the curious progression of Romans 5:3-4. Suffering produces endurance, endurance produces character, and character produces hope. I get it that suffering forces us to endure. I also believe that endurance is where character forms. But, if it’s not too much trouble, I’d like my shot of hope at the beginning, please. Hope would be handy when the undertow pulls my life under. Endurance isn’t very shiny. Character often comes at a cost. So hope seems more useful at the beginning rather than as the carrot that’s dangling at the end.

Maybe the kind of hope that God wants to produce — the kind of hope that anchors our souls — is hope that’s forged in the storm. It’s through endurance that he makes us mature and complete and lacking in nothing. So maybe hope is our completion, the evidence of our absence of lack. It’s not a rainbows and unicorns and fluffy white clouds kind of hope. But it’s a hope that sticks because it’s strong. It’s a hope that, like Job, says, “Though He slay me I will hope in him.”

I’m not really sure how it works. It’s such a difficult, beautiful mystery. But in my own life and in the pages of scripture it plays out again and again through suffering. He replaces what someone else steals. He defends when others malign. He says this world will be hard and in the same breath reminds us He’s overcome it. He leads us to a better a way when we’ve become ugly and angry and sick of our sin. He calms the storm when the storm menaces us. He sees our pain and raises it with grace that’s sufficient. 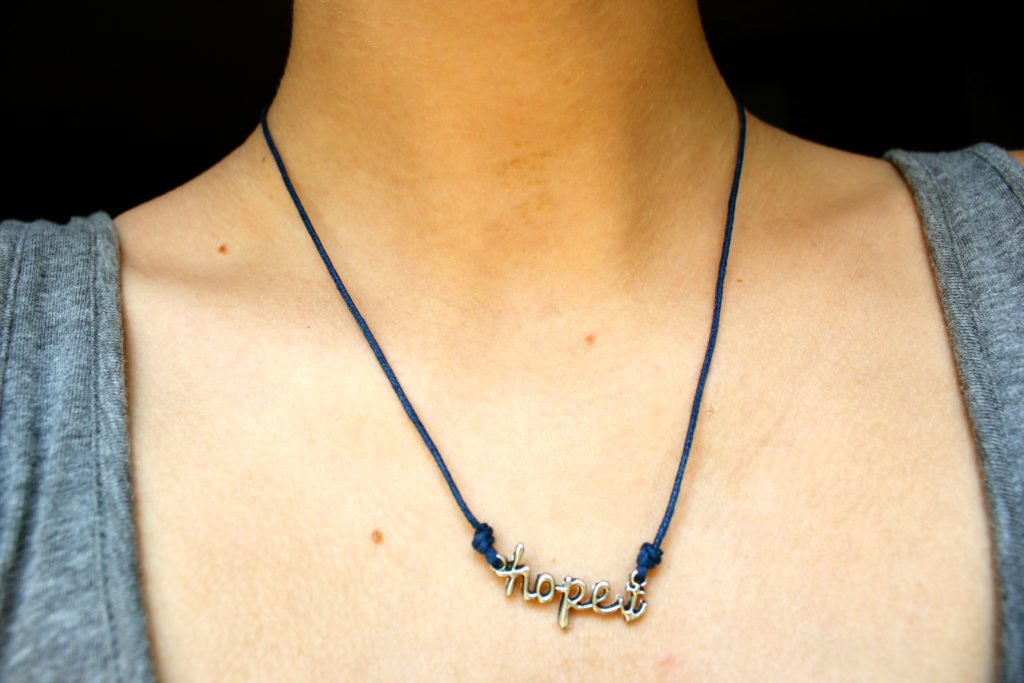 This is a long, long way from a parking lot where a frustrated, impatient mom studied a young man’s relaxed facial muscles. Then again, maybe it’s not. In an instant I can go back to that end of school scene. I can imagine my heavenly Father looking at my tense jaw and my tense life and inviting me to let Him drop anchor. And when I picture Him looking at me that way, I am freer to look at my Man Cub and myself and everyone in my life that way.

Oh, for sure, my son still gets tired and forgetful. He still asks me to bail him out once in awhile. But on the days when his momma is anchored, he takes the cue and becomes more so himself.

Even when I slap his hand for trying to change my radio station.